East Africa is currently suffering the worst drought in a generation. This already worrying situation has been further aggravated by three bad rainy seasons in a row, economic crises caused by COVID-19, and conflicts. All this is compounded by the effects of the war in Ukraine, which are threatening food supplies and causing prices to as much as double. Swiss Solidarity is helping.

Drought in East Africa: A situation that has been deteriorating over the years

The Horn of Africa—Kenya, Somalia and Ethiopia—along with Sudan and South Sudan, are currently experiencing one of the worst droughts in an entire generation, and it has been worsening over the past few years. Three consecutive rainy seasons saw record low rainfall—in October 2020, March 2021 and October 2021—which has led to an unprecedented drought affecting Somalia, southern and southeastern Ethiopia, and eastern Kenya. In Sudan and South Sudan, conflicts, an economic crisis, and poor harvests have only aggravated the already dire situation. Swiss Solidarity is supporting those affected by drought in the Horn of Africa and in neighbouring countries. 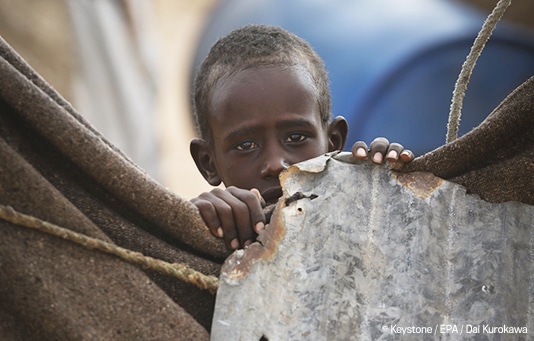 The drought in East Africa in numbers

António Guterres, UN Secretary-General warned of an imminent “hurricane of hunger” and said that “we must do everything possible to avert a meltdown of the global food system. This war goes far beyond Ukraine. It is also an assault on the world’s most vulnerable people and countries.” 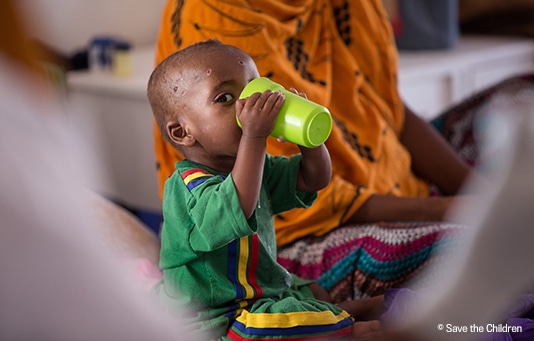 Because of a recurring lack of rainfall and the resulting climate-induced drought, people have been unable to make provisions for bad times and are already relying on aid. Without wheat and fertiliser from Ukraine and Russia, people in East Africa are losing their ability to grow crops for themselves, and food prices are skyrocketing. According to UN data, global food prices have reached their highest level ever recorded.

The world’s 45 least developed countries import at least a third of their wheat from Ukraine or Russia—these include Kenya, Ethiopia, Sudan, South Sudan and Somalia, which imports 90% of its wheat from the two countries. “Now their breadbasket is being bombed,” says UN Secretary-General António Guterres. Furthermore, due to the staggering humanitarian needs in Ukraine and neighbouring countries, East Africa is losing out on urgently needed aid funds from states, organisations and the public.

In light of all these factors, we fear that a humanitarian disaster is imminent. A number of our Swiss partner organisations are already in the affected countries providing urgently needed assistance. 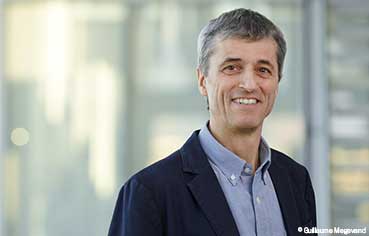 “The situation is critical. We may be heading toward a humanitarian disaster. Repeated, persistent droughts, combined with the impact that the war in Ukraine is having on the global food supply, are having a dramatic effect on food prices. As a humanitarian organisation, Swiss Solidarity has a moral obligation to rush to the aid of the people of East Africa.”

Questions on the drought in East Africa

Why is there a drought in East Africa?

The current devastating situation surrounding the drought in East Africa has several causes. A repeated lack of rainfall has made it impossible for populations to prepare for future droughts by building up reserves. The idea of reserves—food, livestock or seeds—is that you can draw on them in bad times. But when it becomes impossible for people to build up reserves for several years in a row, it becomes equally impossible to draw on them in a dire situation like the one we are seeing today. Other factors influencing the situation include conflicts that are forcing families to leave their homes, livestock or pastures, rising food prices due to the war in Ukraine, and plagues of locusts that have wiped out major crops in recent years.

Swiss Solidarity already raised funds for the famine in the Horn of Africa in 2017. How is the drought different this time around?

In 2017, Swiss Solidarity raised over CHF 19 million in donations with the help of the people of Switzerland. This made it possible for 12 of our Swiss partner organisations to carry out more than 20 projects, which helped to avert the most dramatic outcomes. As in 2017, the situation has been worsening steadily over time. However, other factors could lead the current situation to deteriorate further, especially the ripple effects the war in Ukraine is having on the global food situation. The sheer duration of the drought, which has made it impossible to build up emergency food stocks, along with conflicts and the economy, which took a severe hit during COVID-19, are also threatening the livelihoods of millions of people.

How can you help in the face of this drought?

With donations from the people of Switzerland, we can, among other things, carry out projects with our Swiss partner organisations already working on the ground to distribute food and provide the population with access to drinking water. We also make it possible for people, even those who have lost their livelihood, to buy food and treat the sick and injured. We use your donations to fund projects being led by our Swiss partner organisations on the ground.

How many people are being affected by the drought in East Africa?

The current drought is causing an estimated 29.8 million people in the Horn of Africa alone to suffer from food and water shortages. In Sudan, another 9.7 million people could be affected by famine by autumn. Children are being hit especially hard: some seven million children in the Horn of Africa are already suffering from acute to severe malnutrition, leaving them weakened and much less able to fight diarrhoeal diseases and others, such as cholera.

Is this drought in Africa the result of climate change?

The current drought in East Africa is the result of several years of below-average or a complete lack of rainfall in the region. The drought is most likely linked to climate change and could be one of the worst such crises to hit the Horn of Africa in recent memory. In addition to the climate-related challenges caused by below-average rainfall, factors such as conflicts, rising food prices and locust infestations are further complicating matters.

Is the war in Ukraine having an impact on the hunger crisis in East Africa?

Yes, the war in Ukraine is having a big impact on the situation in East Africa, as well as on other regions of the world. Together, Ukraine and Russia are responsible for 30% of the world’s wheat supply. Around 20% of the world’s maize supply also comes from these two countries, as does 80% of the world’s sunflower oil. If this supply from Ukraine and Russia drops significantly, the people of East Africa will be able to import less food or will be dealt a severe blow by skyrocketing food prices. Countries that rely on imports of significant quantities of these foods are greatly affected—for example, Somalia imported 90% of its wheat from Ukraine and is now facing additional problems.

More news about this topic:

East Africa is in the grip of an extreme drought, a disastrous situation exacerbated by three particularly dry rainy seasons in a row. In addition, conflicts, economic crises and the ripple effects of the war in Ukraine are threatening the food supply, with prices rising and, in some cases, even