Our success story began 73 years ago. On 26 September 1946 Swiss Solidary conducted its first campaign to raise money for children suffering from the effects of the war. Many years have since passed, during which the organization has developed and changed beyond recognition.

But some things have remained constant: the appeals for donations following major disasters abroad and in Switzerland, the untiring support for people in difficult circumstances or in need of urgent help, and exemplary cooperation with our partners such as SRG SSR, Swisscom, Swiss Post (for several decades), Keystone, Privatradios pro Glückskette and above all with our 26 partner NGOs providing aid abroad and over one hundred social institutions providing assistance in Switzerland.

All this means that, over the past 73 years, we have come to represent the face of solidarity in Switzerland.

We have run a total of 259 appeals and collected around CHF 1.8 million in donations (this figure includes an estimate for donations in kind). CHF 1.546 million has been used to fund over 3,750 projects abroad; in Switzerland, CHF 212.3 million has provided aid in the wake of natural disasters and a further CHF 41 million has gone towards providing social assistance.

Many thanks for your support! 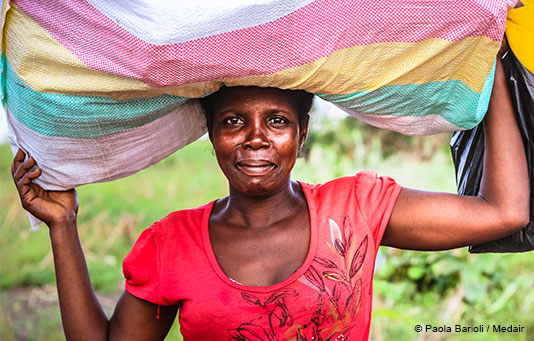 Violence, no access to medical aid, not knowing the whereabouts of husband or children or how they are faring – this is the daily reality for women in crisis regions, who mainly go unnoticed by the rest of the world. We would therefore like to dedicate our 250th fundraising appeal to such women and use the money raised to help them become drivers of change in their communities.