Drought, lack of rainfall and rising food prices: the situation in East Africa, especially in Somalia, is becoming more and more dramatic. A few days ago, the United Nations warned of an impending famine catastrophe.

East Africa is currently experiencing the worst drought in a generation. Four bad rainy seasons in a row, an economic crisis caused by Covid-19, as well as armed conflicts and the effects of the Ukraine war with rising food prices are aggravating an already worrying situation. In early September, the United Nations warned of an impending famine.

Somalia is particularly hard hit by the current devastating drought. According to UN estimates from July, the current drought – the worst in the last 40 years – exceeds previous ones “in terms of duration and severity”. 7.8 million people, almost half the population, do not have enough to eat. According to the United Nations, one in five children could be severely malnourished by October. These up to 1.5 million people face starvation if they are not helped immediately. Due to the desperate situation, more than one million people in Somalia have already left their homes in search of food for their children.

Effects of the Ukraine war

In addition to the extremely precarious climatic situation, Somalia is also enormously affected by the impact of the Ukraine war. Many of the poorest countries in the world import a large part of their wheat from Ukraine or Russia – Somalia even imports 90% of its wheat requirements from Ukraine. The rising food prices are therefore already impacting people who are in desperate need of food. 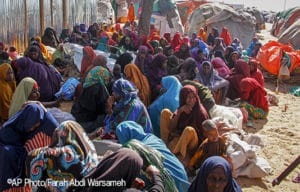 Help through our Swiss partner organizations

Swiss Solidarity opened a donation account for people affected by hunger in East Africa back in April and has since been collecting donations to fund projects run by our Swiss partner organizations. The projects focus on providing people with life-saving support and medical care. Thank you for your solidarity!